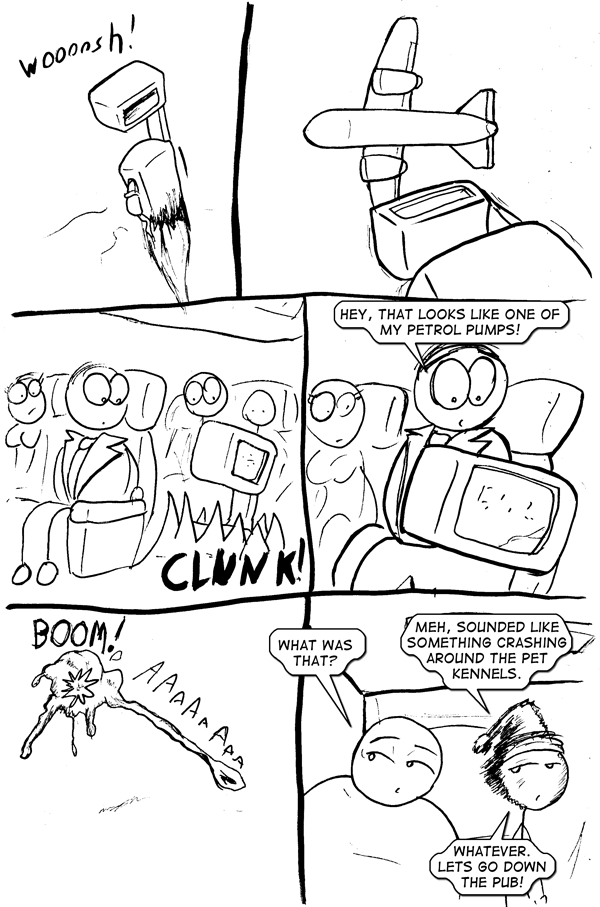 Sticky The Stick Man runs once a week (Wednesday) and features a vile and rather random little stick figure that I used for filler for my other strip S.S.D.D. Since S.S.D.D. developed a storyline and got all dramatic and serious (something that seems to be a curse of long running web comics), I've lacked an output for knob and fart jokes. This site is that outlet. Also I missed just making shit up as I go along, so I have no idea where the hell any "storylines" are going in this. Good huh? No? Fuck you then!

Okay, for now I'm going to run Sticky once a week, simply because I was only updating this site once a week anyway. SSDD has become a lot more compacted and taking a lot more time, and the sister site “Products of Poisoned Minds” doesn't help. Sticky has always been bottom of the pile of importance, but I'm not going to can it. For now I'm going to update this site on Wednesday's only.

You might have noticed that I've missed the odd update of Sticky the Stick Man. This is almost souly due to writer's block because the strips themselves take no time to draw. As I've mentioned before, I make up STSM as I go along, and only start thinking about the strip the second I sit down to draw it. This is deliberate as I use this strip as a test of my wit or the lack thereof. I've always wanted Sticky to be almost totaly random with no planning ahead. It is the anti-SSDD, the main story arches of which I've planned years in advance. So you might have guessed why Friday's are common slip points. After a week, you're done, and the last thing you want to do is be creative. Sorry for any misses in updates but at least you know why.

Hello everybody and welcome to the new strip! Please excuse the site as it's a little unfinished. I used this site to teach myself proper CSS usage and it's a little rough around the edges. This is the first of three new sites (four if you count the root site's update). The second is also up and running and the third is in the pipework. I'll think You'll like it ;)